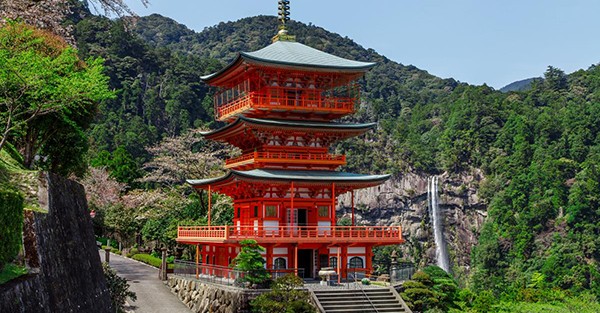 In 578 AD, a Korean immigrant named Shigemitsu Kongo made his way to Japan at the invitation of the royal family.

Buddhism was on the rise in Japan at the time; though it had only been introduced a few decades prior, the Empress consort had been actively encouraging the adoption of Buddhism across Japan.

But since the Japanese had no experience building Buddhist temples, they looked overseas for help.

That’s where Kongo came in.

Shigemitsu Kongo was a renowned temple builder, and the royal family in Japan commissioned him to build the Shitenno-ji temple, which still stands today in Osaka.

Kongo saw an incredible opportunity. Buddhism was catching on fast, and he knew he could be kept busy for decades building temples.

It turned out to be centuries. Over 14 centuries, in fact.

«Show them the waste

Downstream
Open me.
Take me from here to there.
Let the wind blow
my hair and the earth’s skin touch me.

Open me like broken bottles
that bear no drink
yet think themselves worthy of the trash man.
Open me to the clans from which I sprout.
Are they colors separated, cast apart
like memories of drunkenness?
Open me to Africa, Asia, America, Australia.
Open me like a package
of mystery left on your doorstep
in the sweetness of laughter.

Open me to the crudely made lens of love
that screams to be of human hands
and lips.
Open me to the glance
that comforts strangers like the tender overture
of a mourning dove.

Is the wisdom of horses mine
to harness?
Is the muscle of wolves
lawless or the healer of sheep?
Is the black opal of the eye
the…

and the pineal gland.

Has it DAWNED on us that the House of Rose emblem (below) has 22 petals and that there are 22 constellations.

Are we are precisely HOOKED up to the Catch 22 ‘CON’ (hoax) ST. ELLA-†-IONS of the circuitry motherboard sk-eye?

Maybe they reverberate with our 22 DNA CHROMOsomes?

The 23rd ‘gate-WAY or ROAD could lead us to Sirius, the pineal G-LAND. The ‘light bulb’ moment provider.

The B-RIDGE of the CROOK of the neck is called the GOTHA (as in Saxe Coberg GOTHA) which curls round and LEADS/WIRES UP to the pineal G-LAND.

M is the 23rd letter of the alphabet. M or EM always stands for our MOON.

She is our earth to sky Motherboard Goddess. Like EM from the James Bond films, she is the chief commander and is always dressed in…

“Tread softly…Listen…The Eyes and Ears…
The bell tolls…and the trumpets…command it…
There are reasons…
In the songs are clues…
Why? What? Who for?
A gathering comes…Foretold in Legends
From family secrets…To genetic memory…
To long secrets held by Indian Nations…
A magic book…A secret cave…
A medicine man will announce it…
Many will want to go…
They will insist some…whine and attest
Others will cry…while others will deny…
Just know this…And I say it only once…
This is meant for only the right ones…
For the wrong that go…WILL DIE.”
Varence said with a calm unforgiving tone…

“Now…From this point on when I speak…
If its riddles you hear…Oh well…
It had to be said and will be.”

“Finally!” Rana exclaimed with relief. “He
Says it! Now we move on…”

The Origin of Souls

.
There were Beings of pure energy. They were called Solts (spelling is phonetic this is what it sounded like to him). They were orbs about the size of a softball. Their color was a bright yellow like the middle of a daisy with white soft banding around it. They all had this. They communicated with buzzes, whirs, hums, clicks and eeeee’s and other sounds. The animals were also in energy form and they looked like the Solt’s energy balls only a bit smaller and they communicated the same way only with different sound qualities. Everything communicated with one another. Males had lower sounds and female had higher sounds (frequency). The Solts and animals did not have bodies but…